Because I work to make my videos as brief as possible, I usually leave several minutes on the proverbial cutting room floor. But because I also have this blog, I occasionally would like to expand a little bit more on the topic at hand.

This video is about apostasy, which is when a person abandons their faith. They no longer follow Christ. I didn’t get a chance in the video to explain that I do not believe that those who apostatize actually cease being Christians. I believe that there are two types of people who apostatize: (1) those we are truly Christians, and will eventually return to Christ and (2) those who never return to Christ, thereby revealing that they were never really Christians to begin with, as described in 1 John 2, verse 19…

They went out from us, but they were not of us; for if they had been of us, they would have continued with us; but they went out that they might be made manifest, that none of them were of us.

Why do people fall away from the faith?

The fourth reason is really what I addressed in this video. I believe we will see increasing numbers of “Christians” walk way from their faith because of the dwindling popularity of Christianity in North America.

On the positive side, God is purifying His church. The church will become leaner, but it will also become holier and more powerful in its witness and in displaying the love of Christ in all its purity and beauty.

One of my heroes is the late Dr. Martyn Lloyd-Jones (1899-1981).* In the interview from 1970 (the year in which I was born) he boldly presents the truth of Christianity, according to the Bible. What shocked me was how relevant his words are for today. Please note that his definition of “tolerance” is probably slightly different from yours and mine, but I hope that doesn’t cause you to miss what he is saying on the subject. The demeanor in which he communicates the message reveals the right way to go about declaring the exclusivity of the Christian message. He is not arrogant, he is not angry, and he is not condescending. He is stating the facts of what the Bible teaches and the necessary implications for Christians. My how we need men of God to stand up for the truth like this!

*Dr. Martyn Lloyd-Jones was on the fast track to become one of the leading physicians in the U.K. when he was called of God to leave medicine and preach the Gospel of Jesus Christ. Initially a pastor in his native Wales, he eventually fulfilled the role of pastor of Westminster Chapel in London, where he became known worldwide for his engaging biblical expositions. 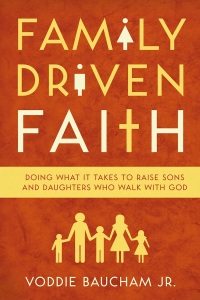 I don’t recall when I first heard of Voddie Baucham but we did have the privilege of seeing him live at the Desiring God National Conference in Minneapolis back in 2006. During that same timeframe I called him and talked with him about twenty-five minutes. He was gracious and I recall our conversation went very well. What I cannot recall is why I called him in the first place!

I started reading his first book, The Ever-Loving Truth, but did not finish it, which is nothing new in my world. This book, Family-Driven Faith, which I purchased through the Amazon Kindle Store and read over three devices (my iPad, my iPhone, and my wife’s Kindle Fire), was more engaging to me because of my interest in the subject matter. Two areas of interest drove me to read this book: (1) how to do a better job as the spiritual leader of my home and (2) how to more effectively lead our church to equip parents in discipling their children. Family-Driven Faith is the only book I have ever read that that I can recall addresses these two issues, and Baucham does so boldly and directly.

END_OF_DOCUMENT_TOKEN_TO_BE_REPLACED

Many years ago I was interviewed by a newspaper for a front page story. Having a feeling I might be quoted at length, which I was, I chose my words very carefully. Apparently the writer of the story felt at liberty to quote the spirit of my words instead of my exact words. Unfortunately many of the synonyms he chose were precisely the words I intentionally avoided. I was aghast. My Dad, being a journalist, assured me that my experience was common. That experience gave me a profound sympathy for celebrities and politicians who have expressed great distrust in the media machine.

Best-selling author and controversial Southern Baptist pastor Rick Warren has recently suffered much misunderstanding and outright attacks from fellow Christians because of a poor job by the media. Rumors have been flying that he has rejected the exclusivity of Jesus Christ and Christianity. A recent interview sets the record straight.

Here is an example of where Christians are far too quick to jump on the background and believe everything that is said or written about a fellow Christian. The goal of our country’s judicial system is to protect the innocent; a person charged with a crime is assumed innocent until proven guilty. Should we Christians be quicker to rush to judgment than our courts are set up to do?

Sadly, conservative evangelical Christians seem quick to rush to judgment. We don’t just rush to judgment, we also tend to be swift to slander. If we truly lived out the Golden Rule, we would assume the best in others and be slow to judge others and remember that you cannot trust everything you read.

J. Lee Grady, a contributing editor for Charisma magazine, took the opportunity this week (in honor of Reformation Day) to call for reformation within the charismatic movement. As an outsider looking in I think his 15 points are spot on. Here are the first three:

1. Let’s reform our theology. The Holy Spirit is the third person of the Trinity. He is God and He is holy. He is not an “it.” He is not a blob, a force, or an innate power. We must stop manipulating Him, commanding Him and throwing Him around.

2. Let’s return to the Bible. The Word of God is the foundation for the Christian experience. Any dramatic experience, no matter how spiritual it seems, must be tested by the Word and the Holy Spirit’s discernment. Visions, dreams, prophecies and encounters with angels must be in line with Scripture. If we don’t test them we could end up spreading deception.

3. It’s time for personal responsibility. We charismatics must stop blaming everything on demons. People are usually the problem.

Michael Yousef, pastor of The Church of the Apostles in Atlanta, Georgia, shares a bold message titled, “The Shack Uncovered” in which he identifies 13 heresies in the book. Watch it HERE. Scroll down to see the media player.

Nothing like posting a critical video of America’s most popular preacher to stir things up. MacArthur doesn’t hold back on this video, so for you who are Osteen fans, don’t say I didn’t warn you!

I have often been asked what I think of Joel Osteen. I think he is a good motivational speaker. But he is not a Bible teacher or a Gospel preacher. I am sure he is a great guy and all that, but anyone who reads the Bible regularly and embraces the elementary rules of Bible interpretation will understand that his message does not line up with Biblical truth. MacArthur says it a little more strongly:

Like many churches, we had an attendance boost yesterday. But Bay Area Fellowship of Corpus Christi, Texas, drew more than 3 times it’s average Sunday attendance yesterday with more than 23,000 in attendance on multiple campuses. The secret?  They gave away new cars, new appliances, and many other door prizes:

The multimillion dollar giveaway attracted nationwide attention, not all of it positive. The church was criticized for promoting consumerism and bribing people to come to church for prizes. Besides the eye-popping large prizes, the church gave away 15,000 prize packs with coupons for free goods and services such as a chiropractic exam, Hooks baseball tickets, a week’s membership to Gold’s Gym and a night’s stay for dogs at the Pooch Pad.

Cornelius used humor to deal with the backlash.

‘People used to get on us for asking for money. Now, they’re getting onto us for giving money away,” Cornelius said to laughter from the crowd. “I don’t know what to do.'”

What’s your thoughts on this?  Is this a legitimate way to increase the flock?  Does this methodology, in your opinion, match up with the way Jesus Christ ministered to the masses during His three year public ministry during His incarnation? At what point does a “whatever it takes” mentatlity toward reaching souls cross the line into compromising the message via the method?

By the way, we gave away books at Harvest Jacksonville yesterday. Each household received a free copy of John Piper’s Fifty Reasons Jesus Came to Die. Additional copies were available for $0.50 per book.