I’ve participated in a few internet arguments in my day, especially several years ago when social interaction on the internet was fairly new. It didn’t take me very long at all to realize that arguing on the internet was about as fruitful as an orange tree in the arctic. Occasionally, though, I will step into the ring for a few minutes, not to argue, but to present some facts that might be relevant to the discussion. If someone tries to bait me into an argument, I leave. After all, if I’m going to waste time, I might as well waste it doing something more fun! 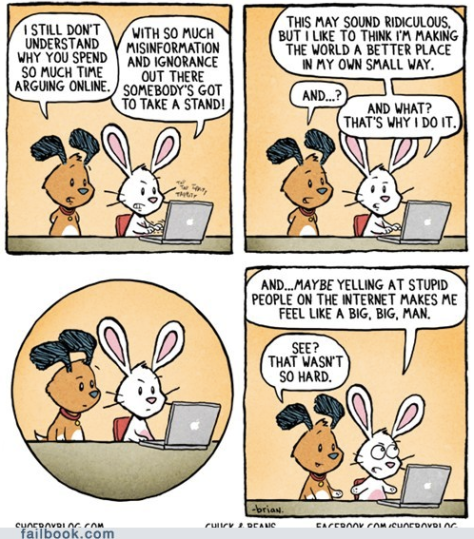 Just this week I defended a friend on the internet when I saw that someone was criticizing him with false information. In the comment section, I pointed out that it’s one thing to disagree with my friend’s approach to ministry, but quite another to make a charge against him that was factually false. I corrected the inaccuracy…the blog author responded by defending his perspective…I made one more comment to clarify my point and moved on.

I love the internet because it is the people’s media. Anyone with access to a computer can publish his opinions and beliefs for anyone else in the world with a computer to access. And, at least at this point, it’s tax free (Keep your hands off our internet you evil politicians!). What I’ve learned through the years is that arguments that have the best chance of changing my mind on an issue are the ones that are Scripturally based with a spirit of love. Someone has pointed out…

So I don’t even listen or pay attention to the name-calling, angry, self-proclaimed “discernment” people. Neither do I give any time of day to the “What we believe doesn’t matter as long as we’re sincere and loving” crowd (not that I ever gave them the time of day). I really only want to listen to those who are attempting to produce a truth-filled, grace-saturated articulation of a position on a matter. Show me that and I’m all ears.

Yesterday I preached on Colossians 3:16, which says…

Let the word of Christ dwell in you richly, teaching and admonishing one another in all wisdom, singing psalms and hymns and spiritual songs, with thankfulness in your hearts to God.

My posts at http://www.pastorbrett.com this week will focus on advice and resources for applying this verse. Some of the material will be new, but most of the material I will be pulling out of the archives.

Here is the topics I plan to cover:

To start, here are some links to resources I mentioned during the message yesterday:

This blog, http://www.pastorbrett.com, has been up and running for about 16 months now. One post has far and away been the most popular: “Should a Christian Drink Alcohol?” Posted on December 4, 2008, it is still the most popular post every week and is now approaching 30,000 views. I get some interesting emails and comments about this particular post, some of which appear to be written exactly when a person is at peak influence by alchohol! It is interesting to see how angry a person can get about an issue, even though I believe I presented my opinion rather irenically.