I took a break from producing “Pastor Brett” videos over the past couple of months. A few reasons contributed to my absence, most notably the relocation of my office.

Unmentioned in the video above is the amount of time I’ve put into launching our Facebook Live worship service initiative, something we are still working on improving.

Since its rise to popularity, Cory Asbury’s worship ballad “Reckless Love” has earned Asbury multiple Dove awards, has well over one hundred million YouTube views, and has been a mainstay in the top 10 worship songs used in churches (according to CCLI). But it has not been without controversy, and rightly so.
The song gets its title from the opening line of the chorus, which says, “O, the overwhelming, never-ending, reckless love of God…”
According to Merriam-Webster, the word ‘reckless’ means…
1 : marked by lack of proper caution : careless of consequences
2 : irresponsible
Is this truly a word we want to associate with the love of God?
Synonyms include daredevil, foolhardy, hell-for-leather, and kamikaze.
These are not exactly positive associations for a word being used to describe what is commonly considered one of God’s premier attributes.
Through the centuries, English-speaking preachers and songwriters have used numerous adjectives to seek to describe the love of God… amazing, beautiful, captivating, enduring, great, indescribable, marvelous, pure, sanctifying, satisfying, wonderful, and so many more. But prior to this song, seeking to find a Christian use of the word reckless to describe God’s love is like trying to find a needle in a field full of haystacks.
In one of his more popular “Ask Pastor John” podcasts, pastor-theologian Dr. John Piper, himself no stranger to adjectives, tackled the question of whether a congregation should even sing “Reckless Love.” He points out that it is possible to import your own meaning on the surprising lyric so that it is acceptable, but he also makes a plea to songwriters to choose words that do not require that kind of work for the congregation.
I agree. There is no doubt whatsoever that God’s love is not reckless. God’s love is not marked by a lack of proper caution. God’s love is not careless of consequences. God’s love is not irresponsible.
That said, from a human perspective, God’s love can certainly appear to be reckless. When a lost sinner’s eyes are opened to the wretchedness of his own sin, when he sees how truly unworthy he is, and when he begins to think of himself as beyond redemption, at that point God’s love in action for him can seem to be a truly risky, and even reckless, endeavor. In this sense, one can begin to understand why someone might sing of God’s reckless love.
But what seems to be true is not always true. And that is certainly the case with the word reckless when it comes to God’s love.
The lyrics of “Reckless Love” are based upon the parable of the lost sheep, as recorded in the fifteenth chapter of Luke’s Gospel. In the chorus of the song, reference is made to how the shepherd is willing to leave the ninety-nine sheep to rescue the lost one. By associating the word reckless with this biblical parable, the songwriters seem to imply that it was an irresponsible act for the shepherd to leave the ninety-nine for the one lost sheep.
According to Luke 15:4, Jesus asks, “What man among you, who has a hundred sheep and loses one of them, does not leave the ninety-nine in the open field and go after the lost one until he finds it?”
The songwriters of “Reckless Love” miss an important reality. According to verse four, Jesus does not portray the act of the leaving of the ninety-nine in pursuit of the one as irresponsible, but as an expected, normal action.
The shepherd is able to responsibly leave the flock of ninety-nine because they are already safe. His loving action for the lost one is beautiful and wonderful, but it is not irresponsible or reckless.
So why is this concept of God’s love being reckless so attractive? My theory is that it fits well into a modern romantic view of God’s love. There are a considerable number of Christians who like to think of God’s love much like they think about romantic love between a man and a woman. It is not uncommon for a woman to be attracted to the idea of a man being reckless and risky in pursuing her. The idea that a man would risk it all for a woman’s love is not in the least bit unfamiliar to love stories today.
But while there are certainly valid parallels in comparing the love of God toward us with the romantic love between a man and a woman, there are numerous ways in which one can contrast the differences as well. And this is such a case.
One might say, “But you are being too nit-picky! Lighten up. Just enjoy the song!” The problem with that is simply this… God is looking for those who will worship Him in spirit and in truth (John 4:20-24).
Truth matters, especially when false teaching is threatening God’s people. One of the dangers of singing of God’s love as reckless is that such language about God’s love actually fits well with an aberrant theology that has become in vogue among some today. This particular false teaching places a heavy emphasis on the possibilities of the future in an effort to protect the doctrine of man’s free will. But in the process God’s omniscience, omnipotence, and sovereignty are diminished.
Based upon a careful examination of the rest of the lyrics of the song, it seems safe to assume that the writers of “Reckless Love” do not embrace the aforementioned bad theology. But by writing such a successful and popular song that uses the word reckless to describe God’s love, they might be unwittingly contributing to the idea that God truly is engaging in reckless behavior when He loves us. This is a consequence that reveals a lack of proper caution, and might even be considered careless, or irresponsible, songwriting.
It might even be safe to say that the choice of the word ‘reckless’ to describe God’s love is, pardon the repetition, reckless. 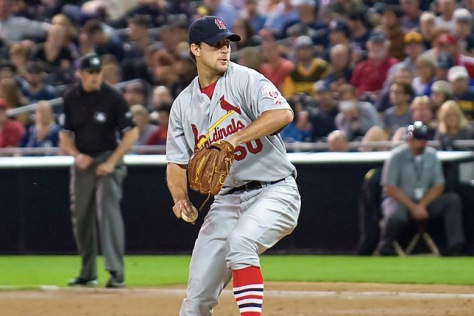 St. Louis Cardinals pitcher Adam Wainwright (aka “Waino”) is inviting people to join him in reading through the Bible in 2020. He is using a chronological Bible reading plan and the plan begins tomorrow, January 12th.

To join Wainwright on this journey through God’s Word, sign up HERE. If our family wasn’t already 12 days into the Tabletalk plan, we would be joining Waino as well.

*For some tips on reading through the Bible, click HERE.